Ashi-Tabi Home Ashikaga: Things to See and Do Events 節分鎧年越 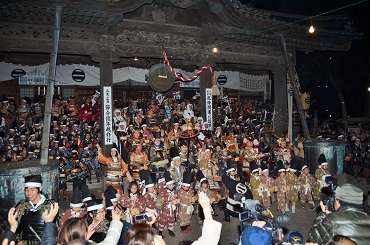 The traditional event "Yoroi Toshikoshi" (See the old year off by Samurai Armor Procession), which calls spring to Ashikaga, is held on February 3rd, at Setsubun night.
There is a procession of about 200 citizens who dressed in Samurai armor, like as Bando warriors. While playing the Jin Daiko drums, they march on the main street as if they were in a Rekishi Emaki (historical picture scroll), and bravely walk about 1.3km from Orihime Community Center to Bannaji Temple in about an hour.
After arriving at the Bannaji Temple that used to be a residence of Ashikaga clan, general mayor reads the `Wish` that hope Ashikaga City’s prosperity, and has the memorial ceremony of Ashikaga clan.
After that, citizen who wearing the Samurai Armor join the “Tsuina-shiki (Mame Maki Ceremony)” (throw the beans) that is held in the corridor of main hall.
After that, triumphant ceremony is held, and give a shout of triumph “Ei Ei Oh-!”

“Yoroi Toshikoshi” is an old fashioned and traditional event that was started in the middle of Kamakura Period (about 750 years ago) by the historical fact that Ashikaga Yasuuji who is grandson of Ashikaga Yoshikane ordered Bandu Musha (500 soldiers)  to gather in the south gate of Bannaji Temple to appeal the unity and power of Ashikaga clan.
Although it temporarily stopped after the Meiji Restoration, it was revived mainly in the city's textile industry in 4th year of Taisho era, and has been inherited as a festival representing Ashikaga City.